A FEAST OF TURKISH DELIGHTS AT NIMITR 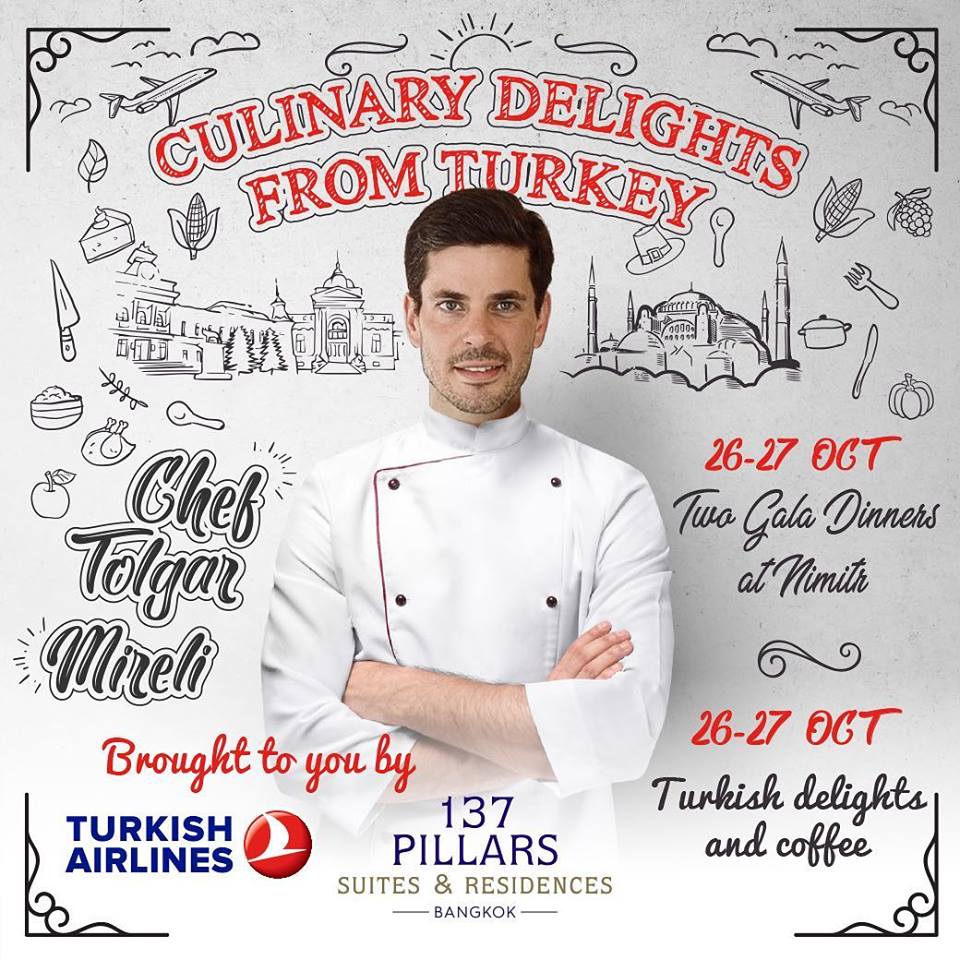 Celebrated Turkish Chef Tolgar Mireli is back at luxury boutique hotel 137 Pillars Suites & Residences Bangkok with preparations for an exciting culinary journey that will bring the delights of Turkish cuisine and culture to the city on the occasion to celebrate in commemoration of Turkish National Day, which is on 29 October.

Focused on the intersection of food, wine and decades old traditions of Turkey, the event titled “Culinary Delights from Turkey” is co-sponsored by Turkish Airlines and will feature two gala dinners.

One of the most successful and celebrated chefs to come out of Turkey, Chef Tolgar was an instant hit at the Fourth Asian Organic Gourmet Festival (AOGF) held earlier this year at 137 Pillars Suites & Residences Bangkok, where he participated in cooking demonstrations, a gala dinner and a grand finale brunch with other participating chefs.

He has worked in some of the best restaurants around the world including Michel Roux Jr’s Le Gavroche in London, the first UK restaurant to be awarded one, two and three Michelin stars. He has also put in time at the two-Michelin star and four-Gault Millau toque Restaurant Hubertus in Austria, and Germany star chef Johann Lafers’ Michelin-starred Le Val D’Or. While he loves cooking classical French and Italian cuisine, Chef Tolgar also has a passion for promoting the rich variety of tastes and styles that can be found in Turkish cooking.

The culinary journey includes two gala dinners at the exquisite Nimitr restaurant on the 26 and 27 October. For this Chef Tolgar has created two different five-course set menus priced at THB 3,000++ for food only and THB 4,000++ for a wine pairing. Diners will feast on fantastic dishes such as “Hummus’’ cumin flavored chickpea puree, “Mantı’’ Meat Stuffed Mini Dumplings with sumac, Slow-cooked Lamb Shoulder wrapped in Kadayif with Garlic Pilaf, Traditional Pumpkin Dessert with Tahini and Walnuts and Cream stuffed dried apricot & figs. The hotel’s sommelier will also pair wines with both menus.

Diners at these special gala dinners can take part in a lucky draw for a chance to win two roundtrip business class tickets to Europe sponsored by Turkish Airlines.

In addition, from 26-27 October, visitors also have the opportunity to get to know and experience the famous Turkish coffee culture along with traditional baklava and Turkish delight in the hotel lobby.