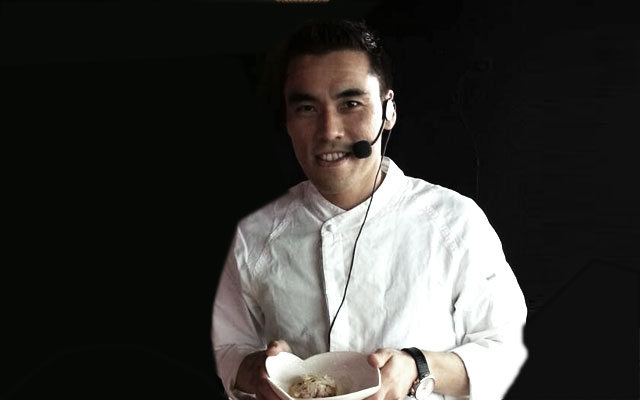 Born in 1976, Hideaki Sato acquired fundamental notions and techniques of Japanese cuisine while working alongside of the founder chef Seiji Yamamoto. Being one of the most trusted among Ryugin’s chefs, Sato was chosen to lead a professional team at Tenku Ryugin and to promote Japanese gastronomy on a global scale, which is the very same goal as that of Tokyo’s main restaurant.

A veteran in both French and Japanese cuisine, Sato began his professional career at age of 19. At 24 years old, he was the executive chef of a French restaurant situated in Nagano prefecture. In order to make himself more knowledgeable and skillful, he regularly interned in various culinary fields and further studied to obtain diploma in professional sommellerie. From 2003 to 2008, Sato worked at the famed French restaurant “Hermitage de Tamura” in Karuizawa where he was the head chef for the last two years.

During his time as an exchange chef at Ryugin, Sato was deeply intrigued by Chef Yamamoto’s creations and philosophy. He then decided to join Ryugin’s team in 2009 and was soon entrusted to be in charge of his own work station and to assist Chef Yamamoto in designing Japan Airlines’ first class in-flight meals.

At the height of 101 floors, Sato strives to bring the highly praised cuisine from Tokyo to Hong Kong.