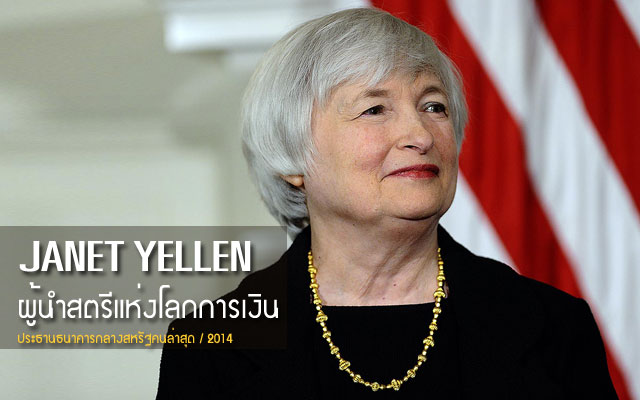 (born August 13, 1946) is an American economist. She is the Chair of the Board of Governors of the Federal Reserve System, previously serving as Vice Chair from 2010 to 2014.

Previously, she was President and Chief Executive Officer of the Federal Reserve Bank of San Francisco, Chair of the White House Council of Economic Advisers under President Bill Clinton, and Professor Emerita at the University of California, Berkeley, Haas School of Business. On January 6, 2014, the United States Senate confirmed Yellen’s nomination to be Chair of the Federal Reserve Board of Governors. Yellen was sworn in on February 3, 2014, making her the first woman to hold the position.

Yellen is married to George Akerlof, a Nobel prize-winning economist and professor emeritus at the University of California, Berkeley. Her son, Robert Akerlof, teaches Economics at theUniversity of Warwick.

Yellen was an assistant professor at Harvard in 1971–76 and an economist with the Federal Reserve Board of Governors in 1977–78.[9] Beginning in 1980, Yellen has been conducting research at the Haas School and teaching macroeconomics to full-time and part-time MBA and undergraduate students. She is now a Professor Emerita at the University of California, Berkeley‘s Haas School of Business, where she was named Eugene E. and Catherine M. Trefethen Professor of Business and Professor of Economics. Twice she has been awarded the Haas School’s outstanding teaching award.

Yellen served as Chair of President Bill Clinton‘s Council of Economic Advisers from February 13, 1997[10] to 1999, and was appointed as a member of the Federal Reserve System‘s Board of Governors from 1994 to 1997. She has taught at Harvard University and at the London School of Economics. Yellen serves as president of the Western Economic Association Internationaland is a former vice president of the American Economic Association. She was a fellow of the Yale Corporation.

From June 14, 2004, until 2010, Yellen was the President and Chief Executive Officer of the Federal Reserve Bank of San Francisco. She was a voting member of the Federal Open Market Committee (FOMC) in 2009. Following her appointment to the Federal Reserve in 2004, she spoke publicly, and in meetings of the Fed’s monetary policy committee, about her concern about the potential consequences of the boom in housing prices. However, Yellen did not lead the San Francisco Fed to “move to check [the] increasingly indiscriminate lending” of Countrywide Financial, the largest lender in the U.S.[11]

In a 2005 speech in San Francisco, Yellen argued against deflating the housing bubble because “arguments against trying to deflate a bubble outweigh those in favor of it” and predicted that the housing bubble “could be large enough to feel like a good-sized bump in the road, but the economy would likely be able to absorb the shock.”[12] In 2010, Yellen told the Financial Crisis Inquiry Commission that she and other San Francisco Fed officials looked for guidance from Washington because “she had not explored the San Francisco Fed’s ability to act unilaterally,” according to the New York Times.[11] Yellen conceded her previous misjudgment of the housing crisis to the Commission: “I guess I thought that similar to the collapse of the stock market around the tech bubble, that most likely the economy could withstand [the housing collapse] and the Fed could move to support the economy the way it had after the tech bubblecollapsed.”[13]

In July 2009, Yellen was mentioned as a potential successor to Ben Bernanke as chair of the Federal Reserve System, before he was renominated by Barack Obama.[14][15] Yellen sworn in by Fed ChairmanBen Bernanke in October 2010

On April 28, 2010, President Obama nominated Yellen to succeed Donald Kohn as vice-chair of the Federal Reserve System.[16] In July, the Senate Banking Committee voted 17 to 6 to confirm her, though the top Republican on the panel, Senator Richard C. Shelby of Alabama, voted no, saying he believed Yellen had an “inflationary bias”. At the same time, on the heels of related testimony by Fed chairman Bernanke, FOMC voting member James B. Bullard of the St. Louis Fed made a statement that the U.S. economy was “at risk of becoming ‘enmeshed in a Japanese-style deflationary outcome within the next several years’”.

Bullard’s statement was interpreted as a possible shift within the FOMC balance between inflation hawks and doves. Yellen’s pending confirmation, along with those of Peter A. Diamond and Sarah Bloom Raskin to fill vacancies, was seen as possibly furthering such a shift in the FOMC. All three nominations were seen as “on track to be confirmed by the Senate”.[17]

Chair of the Federal Reserve

On October 9, 2013, Yellen was officially nominated to replace Bernanke as head of the Federal Reserve. During the nomination hearings held on November 14, 2013, Yellen defended the more than $3 trillion in stimulus funds that the Fed has been injecting into the U.S. economy, which continue to grow at a rate of $85 billion a month.[19] Additionally, Yellen testified that U.S. monetary policy is to revert towards more traditional monetary policy once the economy is back to normal.[20]

On December 20, 2013, the U.S. Senate voted 59–34 for cloture on Yellen’s nomination.[21] On January 6, 2014, she was confirmed as Chair of the Federal Reserve by a vote of 56–26, the narrowest margin ever for the position.[22] In addition to being the first woman to hold the position, Yellen is also the first Democratic nominee to run the Fed since Paul Volcker became chairman in 1979.[23] After being elected by the Federal Open Market Committee as its chair on 30 January, 2014, she took office on February 3.[24] [25]

Yellen is considered by many on Wall Street to be a “dove” (more concerned with unemployment than with inflation) and as such to be less likely to advocate Federal Reserve interest rate hikes, as compared, for example, to William Poole (former St. Louis Fed president) a “hawk” (see definitions under Inflation).[26] However, some predict Yellen could act more as a hawk if economic circumstances dictate.[27]

Yellen is a Keynesian economist and believes in the modern version of the Phillips curve, which, in its original, pre-1970s form, stated a simple inverse relationship between unemployment and inflation. In her 2010 nomination hearing for Vice Chair of the Federal Reserve Board of Governors, Yellen said, “The modern version of the Phillips curve model—relating movements in inflation to the degree of slack in the economy—has solid theoretical and empirical support.”[28]

In a 1995 meeting of the Federal Open Market Committee while serving on the Board of Governors of the Federal Reserve System, Yellen stated that occasionally letting inflation rise could be a “wise and humane policy” if it increases output. At the same meeting she also claimed that each percentage point reduction in inflation results in a 4.4 percent loss of Gross Domestic Product.[29]

Yellen received the Wilbur Cross Medal from Yale in 1997, an honorary Doctor of Laws degree from Brown in 1998, and an honorary Doctor of Humane Letters from Bard College in 2000. In October 2013, it was announced that she will receive an Honorary Doctorate from the London School of Economics in July 2014, making her and her husband “the first wife and husband team to hold honorary doctorates from the School”.[30]

In October 2010, she received the Adam Smith Award from the National Association for Business Economics (NABE).[31]

In 2012, she was elected Distinguished Fellow of the American Economic Association.

In September 2012, she was included in the 50 Most Influential list of Bloomberg Markets magazine.